Secularism and The Third Jihad

At The Revealer, Jeremy F. Walton offers insight on the recent controversy surrounding the NYPD’s use of The Third Jihad in police training activities: 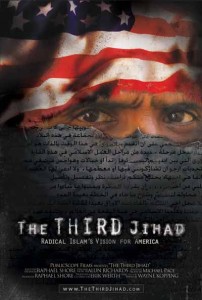 The NYPD’s Third Jihad controversy presents many questions for those who track the politics of and about Islam in the contemporary United States. For instance, one wonders what the airing of such a film in a “training”—presumably a context for teaching tactics and strategies in preventing crime—says about the institutional cultures of American police forces more generally. As scandals surrounding racial profiling on the part of police officers have consistently underscored, the inculcation of and reliance on prejudicial caricatures of criminals by the police constitutes a threat to citizenship in general. My concern here, however, is a broader theme related to The Third Jihad scandal: the Islamophobic conceit that American Muslims pose an imminent threat to American secularism.

Unlike its predecessor, Obsession, The Third Jihad is not explicitly about terrorism or violence. Rather, the film’s central contention is that “much of the Muslim leadership here in America”—to use the film’s own narration—is plotting to undermine American secularism and its cardinal principle of the separation of state and religion. Within the first several minutes of the film, its narrator, Zuhdi Jasser, a Muslim doctor from Phoenix, reveals his post-9/11 discovery in ominous tones: “It wasn’t until I saw this document, written in America, by American Muslims, that I understood what was really going on: a strategy to infiltrate and dominate America.” The weight of this statement rests clearly on the final phrase: What do ‘infiltration’ and ‘domination’ mean in this context?

If ‘infiltration’ and ‘domination’ indicate an armed threat to the state on the part of American citizens—a thoroughly unlikely scenario, given the historically unprecedented military might of the U.S., both domestically and globally —then this is surely a matter of public concern. But this is not what Jasser and the producers of Third Jihad have in mind. Rather, the “strategy to infiltrate and dominate America” that elicits such patriotic paranoia on the part of the film’s producers amounts to a rejection of secularism: certain American Muslim organizations and individuals reject the privatized model of religion that most (though certainly not all) Americans of other faiths accept and even valorize.