Recently released by Oxford University Press, Michael Saler’s latest volume, As If: Modern Enchantment and the Literary Prehistory of Virtual Reality, explores the imaginary realms of the modern world: 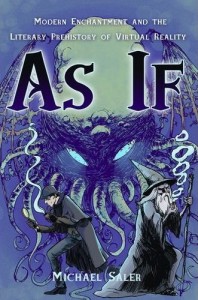 Many people throughout the world “inhabit” imaginary worlds communally and persistently, parsing Harry Potter and exploring online universes. These activities might seem irresponsibly escapist, but history tells another story. Beginning in the late nineteenth century, when Sherlock Holmes became the world’s first “virtual reality” character, readers began to colonize imaginary worlds, debating serious issues and viewing reality in provisional, “as if” terms rather than through essentialist, “just so” perspectives. From Lovecraft’s Cthulhu Mythos and Tolkien’s Middle-earth to the World of Warcraft and Second Life, As If provides a cultural history that reveals how we can remain enchanted but not deluded in an age where fantasy and reality increasingly intertwine.

“Michael Saler’s dazzling book adds a new historical dimension to our understanding of imaginary worlds and literature; through As If a surprising illumination of our modernity becomes possible.” —Simon During, author of Modern Enchantments: The Cultural Power of Secular Magic