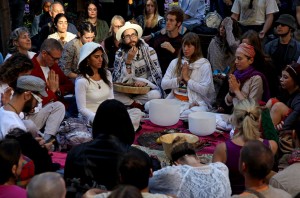 On September 17, protesters heeded the call to occupy Wall Street and set up camp in a semi-public park in downtown Manhattan’s Financial District that is once again known as Liberty Plaza.

In the roughly three weeks since the Occupy Wall Street protests began, several commentators have begun reflecting on the place of faith in the movement. The meditation area on Liberty Plaza is only the most overt presence of faith or spirituality in the protest movement.

Some observers noted religious involvement in the early organizing phase, but others have seen deeper connections between the protest movement and religious faith.

[The movement] sounds pretty Christian to me. What the early Apostles called “The Way” was a vision for peaceful living that built on Christ’s teaching, life, death and resurrection. The Way repudiates the pursuit of individual wealth in favor of building communities that care for the marginalized, the desperate and the powerless. Jesus demonstrated this by healing lepers and dining with prostitutes and tax collectors.

This is not to say that American democracy is synonymous with Christianity, nor to argue that it should be. Understanding what’s happening in these protests, though, requires that we quit impatiently insisting on a list of demands and listen for what the Occupy movement is saying. The US Day of Rage website, one organizational hub for the protests, says we’re “fighting a war for the soul of our nation.” Such language is unmistakably religious and reveals how deeply this popular discontent reaches.

Writing for The Revealer, Amy Levin makes a similar observation. While marching with community and labor groups in solidarity with Occupy Wall Street, Levin “experienced what many in my shoes might call a ‘secular spirituality,’ as we ritually chanted in exhilarated unison.” However, she notes that religion still seems to be largely absent and asks:

are we missing something when we note religion is largely absent from this fervent display of social and emotional, ritualized, performative, civil disobedience? What about the 73–86 percent of Americans who identify as Christians, who are also the 99%? Is it time to start looking for “alternatives to norms and ideals of competitive consumer capitalism” in the particular egalitarian religious narratives of our so-called secular public life?

Drawing on Stephen Duncombe’s recent contribution to Frequencies, Levin wonders whether a form of political faith is needed to include this part of the American public in the movement.

In The Scoop, Courtney Bender considers the spirituality of the Occupy Wall Street movement, noting that the movement shares in common with spirituality the difficulty to be easily and neatly categorized.

If Wall Street is an “abstraction,” as one astute observer has put it, and the question of “how to occupy an abstraction” is being worked out as we watch, then we should ask how spirituality, one of the greatest American abstractions, is present in this working-out. It is reasonable to expect that occupiers will turn to the largely uncategorized trove of practice, theology and identity that we have often dismissed as the “spiritual”–and which might turn out to have deeper political dimensions than anyone knew.

Joseph Knippenberg weighs in on the topic in First Thoughts, a blog published by the conservative Catholic magazine First Things. He has reservations about the idea of political faith proposed by Levin and Duncombe. He concludes: “I have no doubt that God is with the folks near Wall Street, but I doubt they’ve recognized Him yet.”

In its roundup of OWS-and-religion commentary, USA Today’s Faith & Reason blog notes, “Occupy Wall Street protests have a spiritual side.”

Finally, this seems a good opportunity to plug that The Immanent Frame contributing editor Nathan Schneider was on location from the start, reporting on the protest movement for Waging Nonviolence, an online magazine he edits.