An interdisciplinary exploration of death

This September 24th, historian, writer, and artist Dr. Paul Koudounaris will open the doors to his first exhibit and book signing of The Empire of Death: 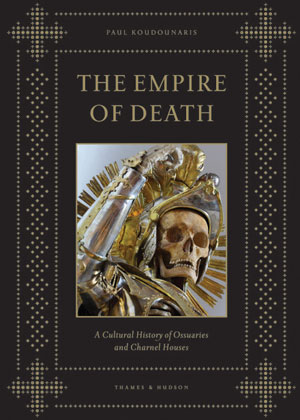 I spent over four years scouring three continents in an attempt to document the world’s finest surviving ossuaries, and in the process recover the history of a long-forgotten genre of Early Modern visual culture: the decoration of religious shrines in human bone. This had been a major movement in the Catholic world in the wake of the Protestant Reformation, but the remnants now exist in only fragmentary form. Since this was a heretofore unknown field of study, it was necessary that I bridge certain gaps between anthropology, religious studies, and art history to reveal how a morbid strain of religious sentiment took root at first among penitent religious orders, and then filtered down to the laity, inspiring a revolutionary new interest in the macabre.

Read the rest of Dr. Koudounaris’ statement, learn more about the book at its official website, or, if you’re a Los Angeles resident, check out the project in person.