Thinking about revolution, religion, and Egypt with Talal Asad 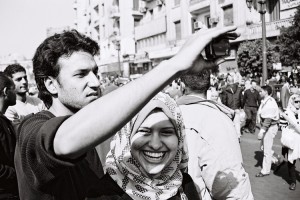 Reflecting on the consequences of the recent events in Egypt for the theory of religion, Carl Raschke writes that the insurrection “probably will cut significantly into the commercial relevance of today’s generations of Islamic and religous [sic.] studies scholars.” In the face of a major political movement in the Middle East that is—as Slavoj Žižek insists—based upon appeals to universal, secular values, the category of religion, Raschke’s reasoning goes, will no longer have much explanatory power. As a result, religious studies will lose much of the market appeal it was able to capitalize on in the post–9/11 world anxious about politicized religious movements and “fundamentalism.” In the terms of positivist social science, religion will be less likely to be included in our models as an independent variable as we try to make sense of political and cultural dynamics in the Middle East and North Africa in the future. (See also Muriam Haleh Davis’s critical remarks on the “new internationalism.”)

Raschke is certainly correct that orientalism and “good multi-culturalist genuflexion” have both been dealt strong blows. He is also correct that this will affect much scholarship on the role of Islam in our world. However, not all contemporary scholars of Islam and religion have an orientalist or shallow multiculturalist outlook. Not all scholars of religion argue that certain populations or civilizations, on account of their religious beliefs, are simply different and therefore unable to be represented in a universalist political project.

For the last two decades, the category of religion—as well as its presumed opposite, the secular—has been subject to questioning by scholars of religion. This questioning attitude comes to the fore in the celebrated works of Charles Hirschkind and Saba Mahmood, two U.S.-based anthropologists who have done extensive fieldwork in Egypt, and who have both commented recently on the events there. They owe an intellectual debt to Talal Asad, an anthropologist who also has fieldwork experience in Egypt as well as neighboring Sudan. I want to briefly hint at how Asad’s thought can help us make sense of religion in the context of the revolution in Egypt. I do this partially on the basis of what he has written and partially on the basis of his brief remarks at a recent forum on Tunisia and Egypt at the Brecht Forum in New York City.

In a much-discussed chapter of his 1993 book Genealogies of Religion, Asad formulated his reservations about the category of religion as used in anthropology, particularly in the influential work of Clifford Geertz. Rather than assume that religion is a transhistorical constant—whether defined in terms of belief, feeling, or symbolic meanings—scholars of religions should examine historically distinct social forms and forces. This entails “unpacking the comprehensive concept which he or she translates as ‘religion’ into heterogenous elements according to its historical character.” This is necessary, Asad concludes, because religion cannot be consigned a priori to a sphere apart from the realm of power. He finds support for this view in St. Augustine’s account of discipline and its relationship to true knowledge of God. Unlike contemporary thinkers taking the modern liberal state as their frame of reference, Augustine recognized that matters of belief were not merely internal and private.

If religion does not occupy a transculturally and transhistorically distinct sphere, then public responses to religion cannot be defined in general, abstract terms either. In the account of the emergence of “secularism” in colonial Egypt in his Formations of the Secular, Asad writes:

A secular state is not one characterized by religious indifference, or rational ethics—or political toleration. It is a complex arrangement of legal reasoning, moral practice, and political authority. This arrangement is not the simple outcome of the struggle of secular reason against the despotism of religious authority. We do not understand the arrangements I have tried to describe if we begin with the common assumption that the essence of secularism is the protection of civil freedoms from the tyranny of religious discourse, that the religious discourse seeks always to end discussion and secularism to create the conditions for its flourishing.

From this perspective, the relationship between religious and secular is complex and cannot be reduced to a conflict of universal ethical principles against sectarian commitments, nor to one of reason versus belief.

Responding to Charles Taylor’s A Secular Age, Asad delivered a lecture, in 2008, called “Thinking About Religion, Belief and Politics,” first at UC Berkeley and again at Princeton University. (The lecture is also forthcoming in The Cambridge Companion to Religious Studies.) Asad takes issue with Taylor’s notion that religion and secularity are defined in relation to belief. Instead, he stresses the importance of studying the ways in which everyday practices form sensibilities and attitudes not connected to beliefs.

In a prescient passage of the lecture, and by way of illustration, Asad turns to the Kifaya movement—a group behind much of the initial organizing for the recent mass protests in Egypt. Asad notes that Kifaya! partly converges with the “Islamic space of moral distancing from the hegemonic religious–secular order” described in Charles Hirschkind’s The Ethical Soundscape. This “Islamic space” is not defined by beliefs held in common, but by common practices and sensibilities. His analysis of Kifaya! is worth quoting at length:

Kifaya . . . brings together a variety of social elements—Muslims and Christians, Islamists and secular liberals, men and women, professionals and labor unionists—in a coalition against the authoritarian, neo-liberal state.  It is not that there is now a happy union of all these elements, but that an irreducible plurality persists as a foundation of political sensibility. What gathers secular liberals and Islamists together—despite a measure of mutual unease—is precisely not their belief, but their oppositional attitude, their common feeling that circumstances in Egypt have become intolerable, more specifically their sense of outrage at the brutality and corruption of the state. They speak of their opposition as something they did not choose but were compelled to take up. However, this situation is not merely negative; it also provides a space of daily interaction and negotiation. Discreet and not so discreet intrusions by American imperial power, as well as the stranglehold that the Mubarak regime has on the political-economic system, make teleology virtually impossible. What the future holds remains unclear. But the religiosity of individual Muslims involved in this movement whom I have encountered is a mode of being often inwardly unsettled yet outwardly civil. This religiosity seeks the cultivation of feelings attuned to mutual care within the community, and in that sense it can lay claim to a democratic ethos. To what extent this is successfully cultivated among significant numbers of people is of course another matter, but my point is that belief in the sense of private conviction has little to do with it.

Asad again stressed the democratic ethos of those involved in protests in Cairo’s Tahrir Square and around the country in his remarks at Brecht Forum on February 8. He tied this ethos to the sense of solidarity that emerged as people gathered peacefully (sometimes even bringing along their children), shared food, and worked together. But it also has deeper roots. Egyptians were united by their shared sense of bitterness about the corruption and mistreatment they had experienced. Also, there was a series of earlier protests that petered out but was then revived by the youth, a process in which women played an important part. These currents cannot be reduced to a single political or economic dimension, nor are they religious in the sense of stemming from a set of beliefs.

So, what role did “religion” play in the revolution in Egypt? Asad bids us to unpack the heterogenous elements of what we mean by religion and to not focus solely on abstract theological notions. In Egypt, in the run-up to the recent revolutionary events, these elements included a widespread attitude of outrage in the face of corruption and mistreatment by the neo-liberal state and a manner of interacting that cultivated the democratic ethos observable in Tahrir Square during the eighteen days leading up to February 11.