Islam and the compulsion of the political 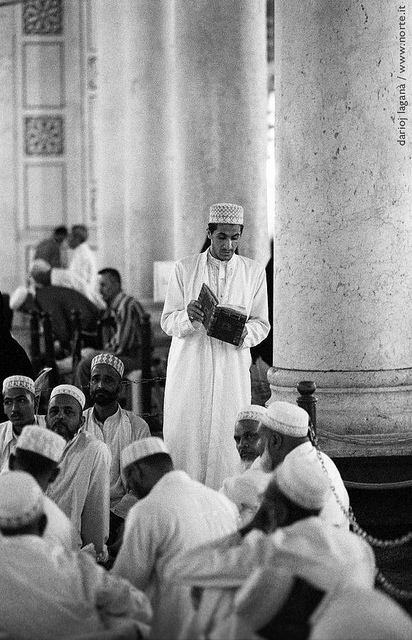 Invariably, contemporary discussions of Islam seem to begin and end with the relationship between Islam and politics—both anti-Islamic pundits and critics of Islamophobia vigorously assert that the mechanics and kinetics of this relationship are central to the evaluation of Islam today. A nexus of paranoia, fear, ignorance, and old-fashioned bigotry typically animates arguments on one side, while those on the other tend toward the polemics and apologetics of subaltern critique. Both camps, however, assume that discussions of Islam necessarily traverse and trouble the domain of the political. This exclusive emphasis on the political marks the difference between Islamphobia à la mode and the older Orientalist discourses of Edward Said’s interrogation: unlike today’s Islamophobia, classical Orientalism constituted a total romance of the East that subsumed political, aesthetic, religious, and cultural forms. In contrast, contemporary Euro-American public debate about Islam evinces what I call the compulsion of the political. While this compulsion achieved hegemony rapidly in the wake of September 11, 2001, it stretches back at least to the seventies and eighties, with high water marks during the Iranian Revolution and the Rushdie Affair.

Much commentary on the recent events in Tahrir Square, throughout Egypt, and across the Middle East has inevitably recapitulated the compulsion of the political in relation to Islam. Despite the deeply ambiguous relationship between the Egyptian pro-democracy demonstrations and politically-oriented Islamic organizations such as the Muslim Brotherhood, pundits from across the political spectrum have seized on the relationship between Islam and politics as the crux of the matter. Arguments have crystallized around two poles, dystopian and utopian, respectively:  either the dismantling of Hosni Mubarak’s autocracy will yield the nightmare of a theocracy led by the Muslim Brotherhood (as Ayaan Hirsi Ali fulminated in the New York Times on February 3), or the post-Mubarak era will witness the triumph of pluralist, liberal democracy, with the Muslim Brotherhood as one prominent voice among a multitude (as Tariq Ramadan asserted in a recent interview on al-Jazeera).

A frequent refrain in the latter, more optimistic mode of argument is that of the “Turkish Example.” According to this argument, political Islam in Turkey—especially as represented by the current governing party, the AKP—offers an ideal model for the commensuration of Islam and democratic politics, one that the Muslim Brotherhood in Egypt would do well to follow in the transition away from the Mubarak regime. Ramadan himself articulates this position in his al-Jazeera comments:

Within the Muslim Brotherhood you have trends, you have people who are very close to the Saudis, when it comes to the literalist understanding of Islam, but you have also people very close to the Turkish interpretation of what it means to be faithful to Islam, with the AKP Party [sic.], and the ruling party now in Turkey, and these people for the last sixty years, they were not radicals, they were law-abiding, non-violent, anti-colonialists and they want freedom…If we have to take an example it’s not to go to Iran but also to go to Turkey, where you have people from . . . Erbakan to Erdoğan, people are changing, and there is nothing, nothing that can be said about, you know, Islam is against democracy.

Similarly, the author of a February 6 article in The New York Times, titled “In Turkey’s Example, Some See Map for Egypt,” muses:

Arriving at a template that effectively integrates Islam, democracy and vibrant economics has been a near-impossible dream for Middle East reformers stretching back decades. . . .

But no country in the region has come closer to accomplishing this trick, warts and all, than Turkey. As a result, diplomats and analysts have begun to present the still-incomplete Turkish experiment as a possible road map for Egypt.

It is understandable that analysts and commentators outside of Turkey have seized on the “Turkish Example”—the relationship between Turkish political society and Turkish Islam has undeniably changed remarkably in recent decades. Both the electoral and post-electoral achievements of the AKP, in contrast to its predecessor, the Welfare Party (which was effectively shut down by a soft coup in 1997), signal this transformation. Nonetheless, in what remains, I want to urge caution against the valorization of the “Turkish Example” of Muslim politics, for both historical and theoretical reasons. For scholars of contemporary Turkey such as myself, the contention that the AKP represents the successful adaptation of Islam to liberal democracy is odd indeed. The reason for this is simple: the recent success of the AKP has not hinged on the general relationship between democracy and Islam, but rather on the gradual erosion of illiberal Kemalist secularism in Turkey over the past half-century. While the full scope of this process extends beyond my purview here, it broadly concerns the gradual accommodation of Turkey’s political economy to broader neoliberal trends following the military coup of 1980 and the restoration of civilian government in 1983. The political horizons of pious politicians and parties, including Prime Minister Erdoğan and the AKP, have indubitably expanded in the quarter-century since then, but this expansion is only one facet of systemic political-economic change in Turkey. Suffice it to say that it is surely mistaken to glorify (or vilify) the “Turkish Example” of the compatibility between Islam and democracy without attending to the more intricate changes that Turkey has undergone recently—processes that bear a complex, often ambiguous relationship to “Islam” in any abstract sense.

My theoretical point concerns the compulsion of the political in discussing Islam more generally. What are the foreclosures of understanding Islam solely in political terms? Whether in Turkey, Egypt, or elsewhere, why does the analysis and assessment of Islam privilege, presuppose, and entail political argument? As Talal Asad has persuasively argued, the politicization of religion is a definitive feature of ‘the secular.’ From the secular perspective Asad describes, the supposedly fraught relationship between religion and politics (which secularism posits as necessarily problematic) exhausts the interest and importance of religion itself.  My final point follows directly from this observation—the compulsion to discuss and comprehend Islam in solely political terms is a political fact in its own right. The compulsion of the political is a self-fulfilling prophecy, one that compels Muslims to account for themselves and their faith in strictly political language, because it assumes that Islam is inherently political. Rather than continue to ask how Islam relates to politics—rather than repeat the compulsion—I suggest that we begin to interrogate the difficulty of thinking of Islam non-politically. It is this question that urgently demands attention and address. The goal of this interrogation should not be to demonstrate, in antithetical fashion, that Islam is essentially non-political—to do so would be to remain within the binary logic that essentializes both Islam and politics. Rather, we should endeavor to speak truth to the powers that insist that Islam is necessarily, monolithically political, and that thereby render Islam itself monolithic and homogeneous.

Jeremy F. Walton leads the research group, “Empires of Memory: The Cultural Politics of Historicity in Former Habsburg and Ottoman Cities,” at the Max Planck Institute for the Study of Religious and Ethnic Diversity in Göttingen, Germany. Prior to his current position, he held research and teaching fellowships at the Center for Advanced Studies of Southeastern Europe at the University of Rijeka (2015-2016), the CETREN Transregional Research Network at Georg August University of Göttingen (2013-2015), Georgetown University’s Center for Contemporary Arab Studies (2012-2013), and New York University’s Religious Studies Program (2009-2012). He received his Ph.D. in Anthropology from the University of Chicago (2009). Dr. Walton’s first major research project focused on the relationship among Muslim civil society organizations, state institutions, and secularism in contemporary Turkey; his book manuscript based on this research is under contract with Oxford University Press. Dr. Walton has published in a wide selection of scholarly journals, including American Ethnologist, Sociology of Islam, and The Cambridge Journal of Anthropology. Additionally, he was a co-editor of the volume Anthropology and Global Counterinsurgency (University of Chicago Press), and has book chapters in Anthropology and Global Counterinsurgency, Orienting Istanbul: Cultural Capital of Europe?, The Cambridge Companion to Religious Studies, and Everywhere Taksim: Sowing the Seeds for a New Turkey at Gezi. “Empires of Memory,” which Dr. Walton designed, is an interdisciplinary, multi-sited project on the cultural politics of post-imperial memory in six former Habsburg and Ottoman cities: Vienna, Istanbul, Budapest, Sarajevo, Trieste, and Thessaloniki.