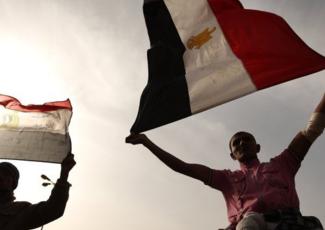 Never has a revolution that seemed so lacking in prospects gathered momentum so quickly and so unexpectedly. The Egyptian Revolution, starting on January 25, lacked leadership and possessed little organization; its defining events, on Friday, January 28, occurred on a day when all communication technologies, including all internet and phones, were barred; it took place in a large country known for sedate political life, a very long legacy of authoritarian continuity, and an enviable repressive apparatus consisting of more than 2 million members. But on that day, the regime of Hosni Mubarak, entrenched for 30 years and seemingly eternal, the only regime that the vast majority of the protesters had ever known, evaporated in one day.

Though the regime continues to struggle, practically little government exists. All ministries and government offices have been closed, and almost all police headquarters were burned down on January 28. Except for the army, all security personnel disappeared, and a week after the uprising, only few police officers ventured out again. Popular committees have since taken over security in the neighborhoods. I saw patriotism expressed everywhere as collective pride in the realization that people who did not know each other could act together, intentionally and with a purpose. During the ensuing week and a half, millions converged on the streets almost everywhere in Egypt, and one could empirically see how noble ethics—community and solidarity, care for others, respect for the dignity of all, feeling of personal responsibility for everyone–emerge precisely out of the disappearance of government.

Undoubtedly this revolution, which is continuing to unfold, will be the formative event in the lives of the millions of youth who spearheaded it in Egypt, and perhaps also the many more millions of youth who followed it throughout the Arab world. It is clear that it is providing a new generation with a grand spectacle of the type that had shaped the political consciousness of every generation before them in modern Arab history. All those common formative experiences of past generations were also grand national moments: whether catastrophic defeats or triumphs against colonial powers or allies.

Continue reading The Egyptian Revolution: First Impressions from the Field.