Will the Arab revolutions spread? 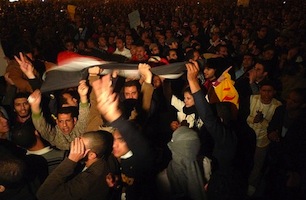 Two final points. First, we must not allow fears of Islamists to short-circuit support for such transitions. Already, scare-mongering over the potential for Islamist takeovers has become a major, even dominant theme of Western and Arab official discussions of Tunisia — and that, in a country where the primary Islamist party al-Nahda was long ago crushed and its leaders exiled. I’ve long expected that if Egypt got the democratic change which so many in Washington talk about, there would be a rapid and intense backlash as the still powerful Muslim Brotherhood necessarily played a major role and as popular opposition to the Mubarak government’s foreign policy jeopardized American and Israeli interests. I’m hoping to be proven wrong.

Second, I think that the Obama administration has handled the last month surprisingly well. It has been absolutely right to resist trying to claim credit for change in Tunisia or to put a “Made in America” stamp on something which manifestly was not. I suspect that there was more of a role behind the scenes in shaping the Ben Ali endgame than is now known. The State Department and the White House have issued a series of strong statements in support of the Tunisian people, including in last night’s State of the Union, and last night the White House took a very well-crafted position on Egypt: “We support the universal rights of the Egyptian people, including the rights to freedom of expression, association and assembly. The Egyptian government has an important opportunity to be responsive to the aspirations of the Egyptian people, and pursue political, economic and social reforms that can improve their lives and help Egypt prosper. The United States is committed to working with Egypt and the Egyptian people to advance these goals.”

Obama was right in the past to not give in to the temptation to make empty declarations on Egyptian or Arab democracy which would not be met, thereby proving the U.S. either hypocritical or impotent. And the administration was right to focus, as I’ve long suggested, not on “democracy” but on civil society, economic opportunity, and the “Bill of Rights” freedoms (of speech and of assembly, transparency and accountability). But now conditions have changed, the potential for rapid transformations has appeared, and it’s time for the administration to seize the moment to make a difference. For all the criticism he’s received on democracy promotion, the Obama administration has now already overseen one more peaceful transition away from Arab authoritarian rule than under the entire Bush administration. It’s no longer wishful thinking to suggest that it might not be the only one.