Habermas: Between Naturalism and Religion 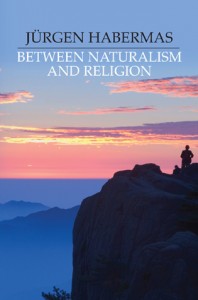 “Reflexive appropriation” of religious ideas is still needed because postmetaphysical philosophy simply does not have the resources to respond to some of the most pressing challenges in modern society, such as (i) the spread of “scientistic” self-understandings that encourage instrumentalizing ourselves and (ii) an “uncontrolled process of modernization” (107, 238) in which markets and state bureaucracies displace social solidarity. The result is an “atrophied normative consciousness” (240) and a decline in sensitivity to social suffering. In the face of that, a “sober postmetaphysical philosophy” simply lacks the “creativity of linguistic world-disclosure” needed to “regenerate” a declining normative consciousness (211).

This is partly why it is important, as Habermas argues in Chapter 5, “Religion in the Public Sphere,” that religious language be allowed in the informal public sphere. On the ethics of citizenship, Habermas forges a middle path between Rawls and his critics (e.g., Nicholas Wolterstorff and Paul Weithman), agreeing with Rawls that a secular state requires an “institutional filter” that prevents religious reasons from entering into formal justifications of laws and court decisions, but agreeing with Rawls’s critics that citizens within the informal public sphere should be allowed to use religious language without restriction.

Translating religious arguments into secular terms is still required at some point in order for them to potentially pass through the institutional filter, but this burden does not rest solely on religious citizens. The cooperative task of translation is also to be shared by secular citizens, which is supposed to mitigate to some extent the asymmetrical burdens of citizenship that arise because religious citizens must ultimately have their religious convictions translated into secular variants while secular citizens bear no such burden. But this can only be expected of secular citizens if they are also “expected not to exclude the possibility that [religious] contributions may have cognitive substance” (139). That is, they must take a “postsecular stance” toward religion as opposed to a “secularist stance” (my terms): the former matches up with Habermas’s philosophical position of being open to learning from religious traditions, while the latter might say, among other things, that religions are merely “archaic relics” that “will ultimately dissolve in the acid of scientific criticism” (138-9).