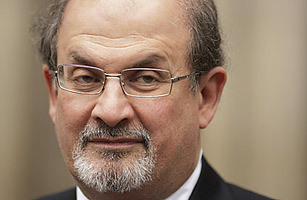 For a man who is both an avowed skeptic and who was once sentenced to death by Iran’s spiritual and political leader, Salman Rushdie is remarkably open toward faith. It’s not that he’s got it. “I would argue that religion comes from a desire to get to the questions of where do we come from and how shall we live,” he said Thursday at the opening of Columbia University’s new Institute for Religion, Culture and Public Life. “And I would say I don’t need religion to answer those questions. Regarding origins, I think you can say [they are all wrong.] The world was not created in six days and God rested on the seventh. It was not created in the churnng of a giant pot. Or the sparks unleashed by the udders of a giant cow against the boulders of a a gigantic chasm. And regarding ‘how shall we live,’ I don’t want answers that come from some priest.”

“But,” he continued, “When I’m writing books, something weird happens; and the result is the books contain a large amount of what you could call supernaturalism. As a writer I find I need that to explain the world I’m writing about. As a person I don’t need it and as person I do. I would agree, that tension is irreconcilable. [But] it’s just there. It’s just so.”