Immigration and Religion in America 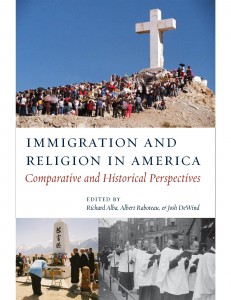 Come celebrate the publication of a new book. Religion has played a crucial role in American immigration history as an institutional resource for migrants’ social adaptation, as a map of meaning for interpreting immigration experiences, and as a continuous force for expanding the national ideal of pluralism. To explain these processes the editors of this volume brought together the perspectives of leading scholars of migration and religion. The resulting essays present salient patterns in American immigrants’ religious lives, past and present. In comparing the religious experiences of Mexicans and Italians, Japanese and Koreans, Eastern European Jews and Arab Muslims, and African Americans and Haitians, the book clarifies how such processes as incorporation into existing religions, introduction of new faiths, conversion, and diversification have contributed to America’s extraordinary religious diversity and add a comprehensive religious dimension to our understanding of America as a nation of immigrants.

Introduction by the editors:

Sponsored by the Sociology Program of the CUNY Graduate Center, the Social Science Research Council, and NYU Press

Laura Duane is a former editorial assistant for The Immanent Frame and regular contributor to here & there. Currently an editorial assistant at a major publishing house, she holds a B.A. in religion from Columbia University, where she studied religious minorities in diaspora.