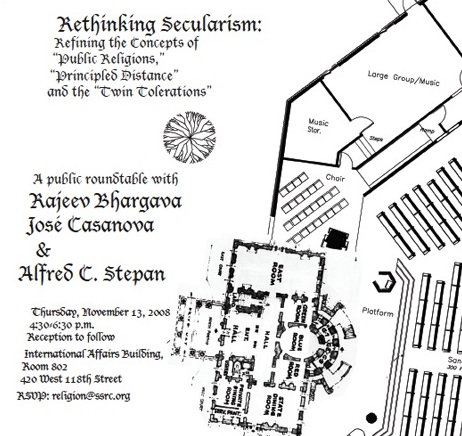 Indeed, it is only by questioning the liberal private-public distinction as it relates to religion, and by elaborating alternative conceptualizations of the public sphere, that one can disentangle the thesis of privatization from the thesis of differentiation and thus begin to ascertain the conditions of possibility for modern public religions.

Principled distance unpacks the metaphor of separation differently from the ideal typical American and French models of secularism. It is a flexible, value-based strategy that allows the state to engage with or disengage from religion, engage with religion positively or negatively, and do so more in the case of one religion than in others, depending entirely on which of these helps reduce forms of religion-related dominations.

If we are looking for the defining characteristics of democracy vis-à-vis religion, “secularism” and the “separation of church and state” are not an intrinsic part of the core definition, but the “twin tolerations” are.

This roundtable is cosponsored by the Social Science Research Council, the Center for the Study of Democracy, Toleration, and Religion, and the Institute for Religion, Culture, and Public Life.