Conversion and race in colonial slavery

On the evening of February 25, 1760, an enslaved man named Mathew requested baptism from the Moravian missionaries who had recently arrived in Jamaica. The missionaries said no. Two months later, he inquired again, this time noting that the missionaries had not yet baptized a single black person on the plantation. They refused again. On August 24 the same year, Mathew raised the subject a third time. Once more, Mathew’s fervent requests for baptism were rejected.1

If this forum is exploring “crossings” and “conversions,” then my question is: who controls the threshold? If one is to cross—as an individual, as a family, or as a people—into the realm of Christianity, then who provides entry? And who gets turned away?

It took several years for Mathew to convince the Moravian missionaries to include him as a baptized member of the church. The missionaries’ hesitation was not based on Mathew’s “preparedness” for baptism, but rather on their experience working in other Protestant slave societies. Three decades earlier, in the Danish West Indies, white slaveholders violently and viciously attacked the Moravians for baptizing people of African descent. Enslaved and free converts, who had flocked to worship meetings to learn how to read the Bible, were beaten for carrying catechisms. In 1739, after years of abuse, African Christians wrote letters to the King and Queen of Denmark, requesting that the monarchs intervene on their behalf. “They Burn our Books and call our Baptism the Baptism of Dogs,” the black converts wrote. “We are oppressed by everyone, beaten and struck with Swords when we assemble to learn about Lord Jesus.”2

Most scholars have examined the history of slave conversion in colonial America and seen missionary failure. People of African descent did not join Protestant churches until the late eighteenth century, they write, because Protestants did not successfully appeal to enslaved and free blacks. This is part of the story, yet the language of “not joining” implies free choice. In practice, the majority of enslaved and free blacks were forbidden from joining Protestant churches. Before 1750, historical records tell the same story again and again. Missionaries, desperate to gain slave owner approval, tried to convince slave owners that conversion to Christianity would make enslaved people more obedient. Slave owners, convinced that baptism would make enslaved and free blacks “rebel and cut our throats,” as the governor of Barbados put it in 1675, refused to listen. Thousands of enslaved and free blacks, meanwhile, intrigued by the theological content and the political power of Christian baptism, fought their way into churches. 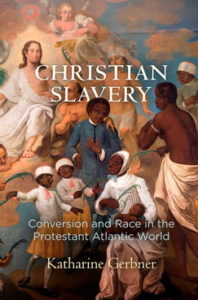 Why was black conversion so controversial? Or to put it differently, why did the baptism of enslaved and free black men and women engender such violence in an empire ostensibly founded on spreading Protestantism? This is the question I address in my book, Christian Slavery: Conversion and Race in the Protestant Atlantic World (UPenn, 2018). Using English, German, and Dutch Creole missionary records, along with law books and governmental records, I examine the political, social, and theological debates surrounding slave conversion in the Protestant Atlantic world. At the same time, I ask why people of African descent chose to convert to Protestantism, and how their conversion forced Europeans to reinterpret key points of Scripture and the meaning of “true” conversion. The debates about slave conversion, I argue, transformed the practice of Protestantism, the meaning of conversion, and the language of race in the early modern Atlantic world.

Mathew’s experience was a consequence of what I call “Protestant Supremacy”: the white suppression of black conversion to Christianity. It was the dominant ideology of oppression in the Protestant slave colonies in the seventeenth and early eighteenth centuries. White slave owners used religious difference to justify enslavement and they policed the line between slave and free by restricting access to baptism. In places like Barbados, South Carolina, and St. Thomas, the vast majority of Protestant slave owners denied enslaved people access to Protestant baptism.

Protestant Supremacy was a cornerstone of the first slave laws in the English colonies. In Barbados, where the first English Slave Code was drawn up in 1660, Christian status was used to distinguish slaves from servants (many of whom were Catholic) and free people (most of whom were Protestant). In this context, before the codification of racial slavery, slave owners viewed conversion as a step toward slave rebellion. This practice was in striking contrast to most Catholic slave societies, where baptism was a tool of colonial governance, and enslaved people were, at least in theory, all baptized Catholics.

Slave owners were not entirely wrong about the subversive power of conversion. In seventeenth-century Protestant slave societies, to be a Christian—and, specifically, to be a member of the established Protestant church—was to hold political and social authority. Voting was based on gender (male), class (property-holding), religion (Protestant), and age (usually, twenty-one). In the Danish colonies, free black Christians were distinguished from unconverted blacks, and permitted to wear more elegant clothes and practice different trades. For many European Protestants, literacy was intimately connected with Protestant conversion. Missionaries reinforced this connection by teaching enslaved people to read and, sometimes, to write. These were deeply disruptive and dangerous skills in the highly militarized and ultra-paranoid slave societies of the Protestant Americas.

To convert, then, was not just a matter of belief; it was a claim to power. Enslaved and free black people recognized this. Hundreds and then thousands of black men and women risked violence to join Protestant churches. Some, especially the black Christian men who gained their freedom and acquired property, sought voting rights.

Just as a small number of free black Christians began to claim political authority, slave owners adapted: they introduced a new language of exclusion based on “whiteness” rather than Christian status. In Barbados and elsewhere, slave-owning lawmakers wrote whiteness into their lawbooks in order to suppress the political rights of free black Christians. The slave owners’ efforts were part of a broad effort to replace Protestant Supremacy with White Supremacy. Any history of race must acknowledge and reckon with these religious origins of racial oppression. Furthermore, any history of conversion in the early modern world must acknowledge the political consequences of slave conversion.

Conversion is always about power. In Protestant slave colonies, conversion was the first step toward wielding and exercising political and social authority. Without acknowledging the power relations embedded in conversion, we fail to recognize their political significance. And yet, to only understand the political aspects of conversion is to miss the point as well. Conversion can also be a moment of intimate reckoning and transformation.

Let us return to Mathew, and his efforts to gain baptism in the Moravian Church. We must interpret Mathew’s conversion on multiple registers. Without acknowledging the violence of Protestant Supremacy, we risk interpreting Mathew’s conversion to Christianity as a form of accommodation or acquiescence to slavery. But without recognizing the intellectual attraction of Christianity, and Mathew’s engagement in debates about theological issues like baptism, marriage, and the afterlife, we flatten his world. In reality, Mathew was intensely engaged in theological inquiry. He questioned everything from the proper preparations for baptism to the meaning of Christian marriage. He interrogated the missionaries about the nature of the Trinity and the meaning of sin. He used scriptural passages to defend and shift religious practice within the Moravian congregation.

On the evening of August 24, 1760, when Mathew requested baptism for a third time, he had just learned the story of Philip and the Ethiopian from Acts 8. This story recounts Philip’s journey into Ethiopia, where he met and baptized an Ethiopian eunuch. The missionaries were fond of the story of Philip and the Ethiopian, whom they called “the moor,” because it showed that the gospel should be spread to Africans as well as Europeans. Mathew, however, had a different interpretation. After hearing it, he approached the missionaries to make a case for his own baptism. Why did the missionaries withhold from him what Philip had granted to the Ethiopian? Reenacting the role of the Ethiopian, Mathew declared that he “believed that [his] creator is the Lord who redeemed [him] with his blood,” and requested immediate baptism.3

Conversion is about power, but it is also about meaning and narrative. When we, as scholars, write about conversion, we must be attentive to the ways our narratives can replicate the narratives of the missionaries and slave owners who wrote the historical sources that we examine. Was Mathew a Christian convert? For years, the Moravian missionaries would say no. The white slave-owning class, meanwhile, denigrated his conversion. For them, Mathew would never be a convert.

Historians and scholars of religion have narrative choices to make. Mine is to privilege Mathew’s claim to conversion over the resistance of Moravian missionaries and white slave-owning Protestants. It is to write Mathew’s story as part of the history of Christianity, not as a story about syncretism, which suggests that his conversion represented a blending of religious traditions. And it is to allow the multiple meanings of conversion to coexist. The history of conversion under slavery was about race, power, and oppression—but it was also about intellectual inquiry and theological transformation under brutal conditions. Mathew was not a “convert” in the sense that he exchanged one set of beliefs for another. Instead, his conversion to Christianity should be understood as a process in which Protestantism evolved as a lived practice.

Katharine Gerbner is associate professor of history at the University of Minnesota. Her research explores the religious dimensions of race, authority and freedom in early America and the Atlantic world. Her first book, Christian Slavery: Conversion and Race in the Protestant Atlantic World (University of Pennsylvania Press, 2018) shows how debates about slave conversion transformed the practice of Protestantism and the language of race. She has previously written articles about Obeah, Quaker slavery, print culture, and theories of conversion. Her current project, “Constructing Religion, Defining Crime,” examines how black religious practices under slavery were excluded from emerging categories of “religion.”